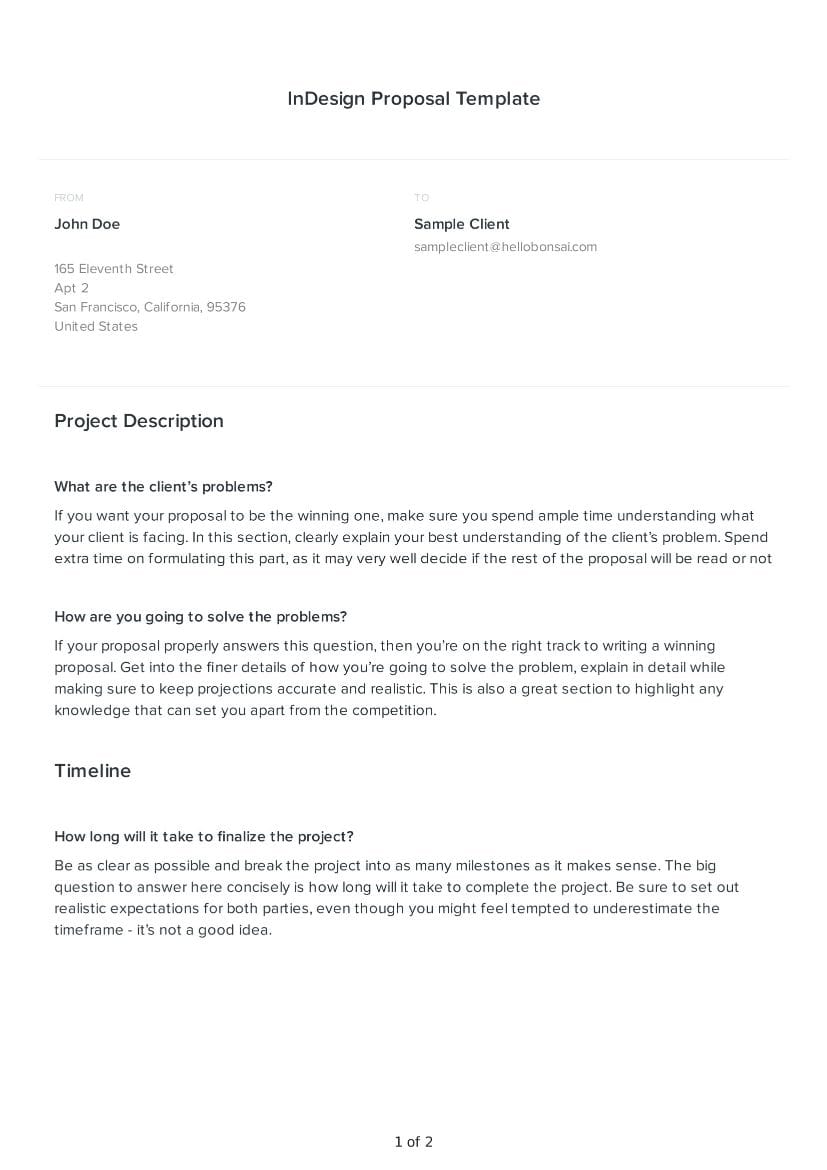 Do you think you are the best fit to manage a project for a client from the outcomes of your research? Great news! But before you move forward, you must have your client or the top decision-maker buy into your idea. Crafting a compelling InDesign proposal would help unfold your plan to a potential client. And if you envision more projects such as recurrent services for other clients, it would help if you craft a InDesign proposal template that you can always edit and use.

A InDesign proposal is an initial framework for establishing the concept of a project. It includes what you want to accomplish, an explanation of the objectives, the plans to achieve the outlines of everything needed by stakeholders to initiate the project. A well-written InDesign proposal template informs and persuades and combines project management skills, research, data analysis, and copywriting.

How to create an InDesign proposal template?

The document follows a conventional format for proposals including the following elements:

This should be brief and to the point; it is essentially the elevator pitch of the project. The executive summary states the problem and outlines the solution plus a picture of the outcome.

This section is where you sell yourself to the potential client by outlining both successful and unsuccessful projects. Talk about how the later could have been handled better plus how the current project will be more successful based on lessons from previous ones

This section of a InDesign proposal template briefly summarises all the needs throughout the project life cycle. These could be resources, tools, and schedules among others

Here, you should outline the process you planned to follow to achieve the goal and bring the project to successful completion. It covers project management steps, skills, and techniques to manage problems and complete each sub-activity effectively.

Now, the InDesign proposal template should explicitly identify the project decision-maker and stakeholders that are authorized by the client to make approval or sign-off decisions.

Here is the section to add other information not included in the proposal, such as materials, team members, etc.

Things to consider before crafting a InDesign proposal template

See the following consideration if you must come up with a solid InDesign proposal template.

Identify the key decision-maker and get relevant information from them if possible. You want to know what the potential client knows about the project, what is not known, and how to make them understand better what you are offering.

The following are the 4 basic reasons why InDesign proposals are rejected according to the Project Management Institute (PMI) Global Congress by Francis McNamara:

In essence, certain InDesign proposals and consequently, projects fail not because they are necessarily bad but because the proposals lacked clarity and persuasiveness.

A compelling InDesign proposal template uses facts, figures, charts, and graphs to substantiate and justify the project's existence. You need to research past projects and gather as much evidence as possible to craft a compelling proposal.

4. State the scope and your approach or plan

Use this template
Ready to freelance like a pro?
Create your own
InDesign Proposal Template
GET STARTED NOW

E-sign & send to your client