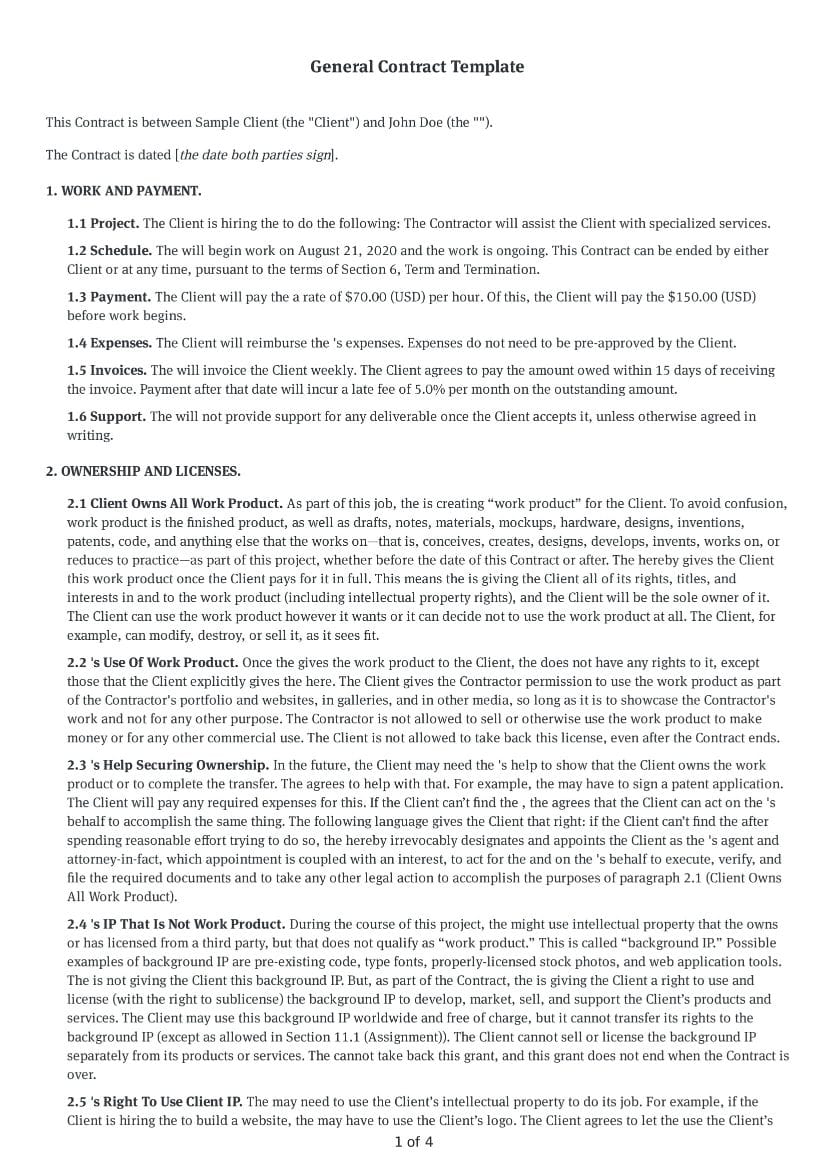 If you are like any other freelancer, then you want to do something you are passionate about while making money. For this to happen, you would need several things in place. One of these is preparing a contract. If you have no idea how to do that, then you would need a general contract template to guide you.

You could learn several lessons from the template, as shown below.

1. Get everything written down in a general contract template

At this point, you are probably asking, “What about oral agreements and contracts?” You should know two things about oral contracts. First, they are valid. Second, they are legally enforceable in a court of law. However, they are not the subject of this article. Moreover, freelancers should avoid oral contracts as much as possible.

Remember, you never know when you might need to go to court to seek legal assistance and opinion over your disagreements with freelancing clients. You stand a better opportunity of proving your claims in court with a written contract instead, hence the reason for relying on general contract templates.

Secondly, it is crucial to keep the language as simple as possible. Use language that both you and the client have no difficulty understanding and interpreting. In most cases, you would not even need the presence or input of a legal counsel unless the clauses need his impartial view. You might also need legal counsel:

Plain-language contracts are beautiful to both parties. General contracts tend to be in plain language as well. Legalese such as “party of the first part” and “heretofore” or “wherewithal” is not necessary for most general freelance contracts. Legal jargon does not make your contract more enforceable.

3. Always engage with the right person with the general contract template

As good as the general contract template is, it would never help you if you sign an agreement with the wrong person. Many times, freelancers deal with clients who run small businesses. However, there are occasions when you might negotiate with a huge organization with layers upon layers of bureaucracies.

In such cases, you need to know that the person you are in negotiations with holds the right strings. Additionally, you also save time by negotiating with the decision maker. Otherwise, a junior officer might have to seek the boss’ permission or input, thus delaying the process. It is fine to ask the other party’s position in the decision-making hierarchy of the organization.

4. Spelling out all the details in a general contract template

As you would learn from the general contract template, it pays to spell out all the details. What you consider unimportant and inconsequential could hold the key to the successful implementation of the entire contract or project. Details that must appear on the contract in clear, easy-to-understand language include:

A gentleman’s or verbal agreement that you shake hands on after speaking about it might be hard to enforce legally. A golden rule worth remembering is contracts are interpretable from their four corners rather than from what the parties involved said to each other. For this reason, you are safer spelling every single detail on the contract even if it appears mundane.

Are you now ready to enter the freelancing world for a share of the pie? In that case, you should look for a general contract template, first. Study it to acclimatize yourself with its nuances, differences, and intricacies. That way, you stand a higher chance of signing an agreement that protects you and enforces your rights as a freelancer.

Ready to freelance like a pro?
Create your own
General Contract Template
GET STARTED NOW