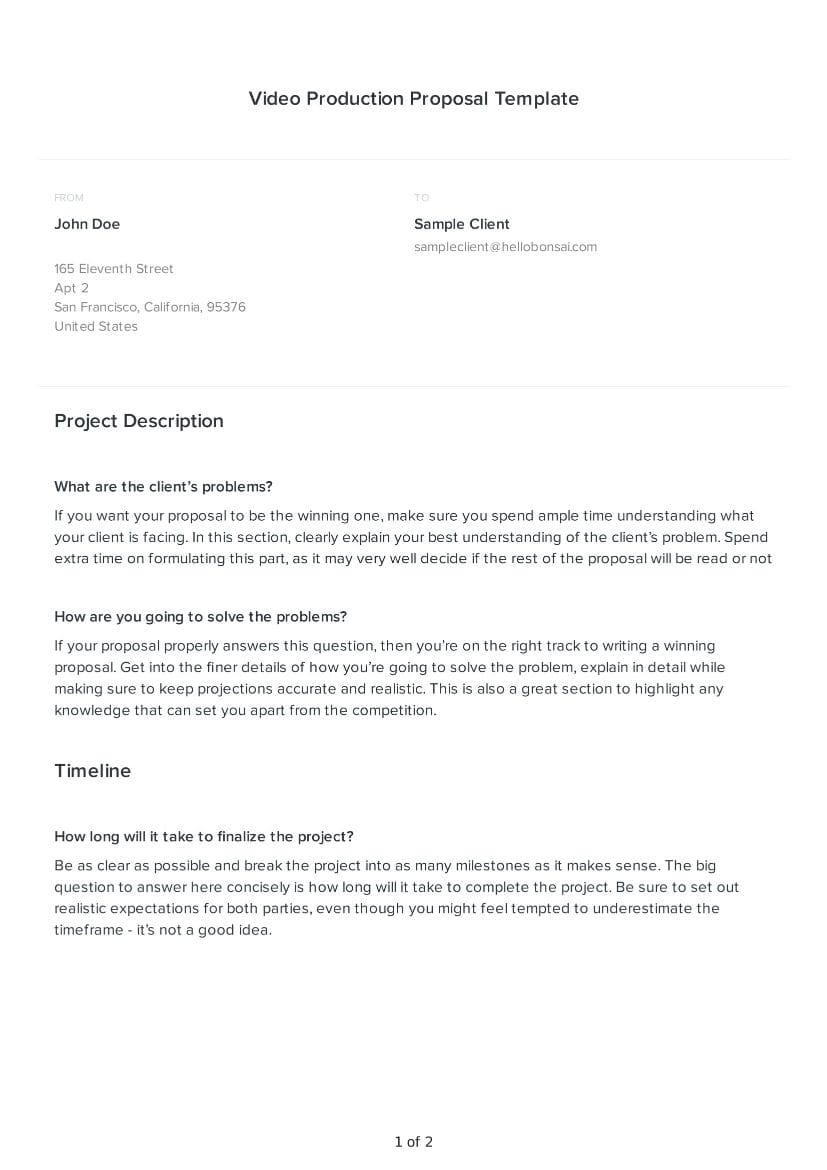 In the freelancing world, a video proposal template is known to increase one’s chances of winning a contract. For instance, if you’re a video production freelancer, you’ll have to create a decent video project proposal that will capture the attention of your potential clients. With a well-written proposal, you’ve got the opportunity to show your clients that you fully understand their needs and that you’re the right candidate to provide a solution to their problems. Since other freelancers will be submitting their proposals for the same role, you need to have a video project template that stands out to win the client.

It’s not easy to convince a client that you’re the perfect match for the role, but with a well-drafted video proposal template, it’s more than possible. Of course, that doesn’t mean you have a video project template that’s a million pages long, but describe your skills precisely without using too many words. Whether you’re new to freelance business or you’re a guru in the field, a good video proposal template goes a long way to get you the project you so desire.

While writing a freelance video production proposal might seem simple, it’s not. If you don’t put in work, you may end up writing many proposals that don’t win you any contracts. Therefore, it’s of import to know what can make your video proposal template stand out as a freelancer. If you’ve never created one before, you don’t have to worry. You can get a video production proposal sample PDF online and borrow from it to make your own. From the samples, you’ll get an idea of what you need to do.

If you have all the time and you’re used to drafting proposals, you can design one from scratch. However, to save yourself the headache that comes with putting information together, consider using a video proposal template. In most cases, a video project template is broken down into sections so that it’s easier for the freelancer to fill in the required details. Even so, it would be best if you gave it a few tweaks to make it unique. Some freelancers could be using a similar video proposal template, and it would be disadvantageous if you end up with the same proposal. So, treat it like you’re writing a new one altogether.

Several video project template PDFs are available online, so it can be challenging to choose the right one. However, if you know the nitty-gritty of a good template, you’re good to go.

Here’s what makes a good video production proposal for any freelancer.

1. Demonstrate your skills in the video production proposal

Remember, the client isn’t interested in knowing how skilled you are, but rather how relevant your skills are to their project. As a freelancer, you should always aim at helping the client achieve their goals.

Therefore, before describing your expertise in the video proposal template, take time to understand the project requirements. It’s not a bad idea to have your proposal ranked among the first, but if the skills defined in the template aren’t relevant to the project, the client won’t waste time reading through the remaining parts of the video project template PDF.

If you’ve worked for a similar type of company or handled a similar task in the past, don’t hesitate to mention that. You can download a well-written video production proposal sample PDF from the net and borrow some ideas from it.

It’s always good to find out how other freelancers are doing it so that you don’t miss the mark. Growth is a common factor in the freelance world. Therefore, you should be ready to learn from those who’ve made it before and possibly follow their footsteps to success.

2. Present your company professionally in the video production proposal

Take time to present your company positively and professionally. Don’t shy off from highlighting your company’s strong points. If there’s something special or attractive about your company, go ahead and mention it. It could be a selling point for you. Even so, be as truthful as possible. Don’t include any information that’s not honest. Your client may be disappointed if they find out this.

In a bid to capture the attention of the client, most freelancers tend to exaggerate their capabilities. If you’re lucky enough, the client may indeed be impressed, but it won’t last for long if you don’t keep your words.

While a video proposal template allows you to briefly discuss your brand, don’t use it as a marketing platform. Keep in mind that all the client wants to know is whether your company is the right fit for the job. Since you’re out to build a strong brand, be as honest as possible about your company’s strengths and achievements. Some clients are very strict, and they may look into the validity of the information given before awarding the contract.

If you don’t know how to go about, go through a professionally written video project proposal. It will give you an idea of how to go about it. Better still, you can borrow ideas from the gurus in the field. They’ve been writing similar proposals for quite some time, so they know what’s right and what’s not.

3. Include specific details about the project in your video production proposal

As a video production freelancer, you need to show your client that you’re fit to do the job. A good video production proposal sample PDF will always include the nitty-gritty of the project to make sure the client is aware of the services your company is providing. You can start by giving a basic description of the project and mention anything that makes you fit for the job.

Even as you do this, try to be as brief as possible. You’re only required to demonstrate to the client that you’ve read through the details and understood what they expect of you. Due to stiff competition and first-come, first-serve principle, some freelancers don’t pay attention to the finer details of the project. All they want is to ensure the client gets their proposal first.

Ensure that the services you mention in the video proposal template are tailored to the client’s specific needs. But only include what you offer so that you don’t disappoint your client in the end. Remember, after convincing the client to hire you, it’s your responsibility to prove that you were indeed the right pick for the job. If you aren’t adding value to a client’s business, they might terminate the contract and look for someone else.

4. Quote a price for the project in the video production proposal

As much the client is interested in knowing how well you’re fit for the job, they’d also like to know how much you’re going to charge for the project. You can do this in two ways; either by setting a fixed price or an hourly rate. Choose whatever meets your needs as a freelancer, but keep the client in mind.

While the contract contains more information about payment, it’s essential to give the client an idea of how much it would cost to get the job done. If it’s too expensive for them, they may consider hiring someone else. But that doesn’t mean you take it too low. Always aim at prices that won’t hurt your business in the long-run.

To make sure you set fair prices, consult from other freelancers to see how much they charge for a similar job. Break down the costs clearly so that it’s easier for the client to interpret. Make sure you lay all the costs out in advance to avoid instances of hidden costs that may ruin the relationship between you and the client.

Use this template
Ready to freelance like a pro?
Create your own
Video Production Proposal Template
GET STARTED NOW

The rich text element allows you to create and format headings, paragraphs, blockquotes, images, and video all in one place instead of having to add and format them individually. Just double-click and easily create content.

How to customize formatting for each rich text

Headings, paragraphs, blockquotes, figures, images, and figure captions can all be styled after a class is added to the rich text element using the "When inside of" nested selector system.