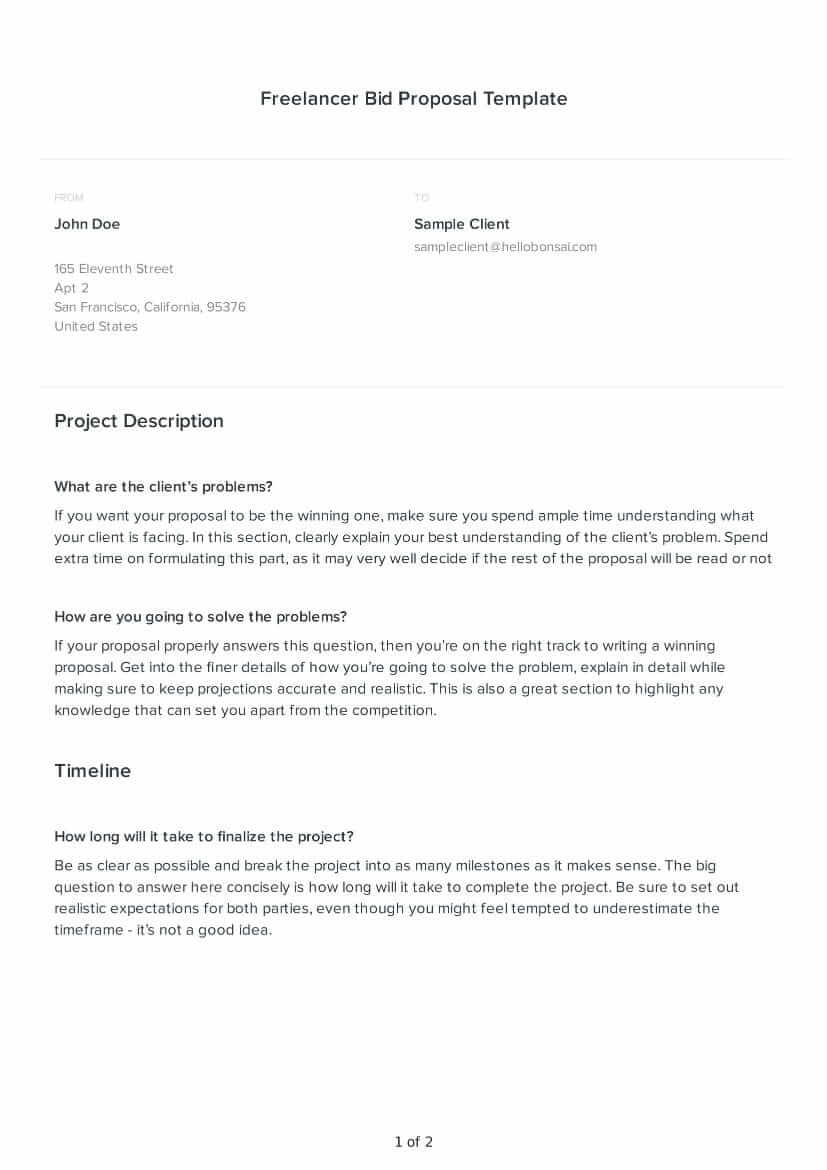 The following are some of the lessons freelancers can learn from the freelancer bid examples.

1. For using a freelancer bid proposal template understand what a sample is

First, freelancers understand what such a sample is. Typically, a freelancer bid proposal template is a document that freelancers write summarizing the qualities making them perfect for the job. The first thing a bid proposal does is to introduce the client to the freelancer in a friendly but professional manner. It also indicates the interest the freelancer has on the job. Through the proposal, freelancers are able to list their qualifications, skills, experience, and background.

2. Show experience and the right attitude in your freelancer bid proposal

The freelancing career is not different from any other. Experience is just as important in such a career. Equally important is the freelancer’s attitude. In fact, many clients have no problem hiring a freelancer that has the right attitude. Many value attitude over IQ or other factors. The best freelancer bid proposal example can teach freelancers different ways of making their attitude shine through.

The freelancer bid proposal template sample helps freelancers to show their ability to do the task:

Apart from that, the bid proposal is the document through which freelancers show the kind of results they are capable of delivering. In the freelancing industry, what you can deliver is more important than pricing. Clients have no problem paying you top dollar if they know that you will deliver beyond their expectations. It’s better to under promise and over deliver when it comes to your freelancing projects. Clients will respect and pay you more for over-delivering every time.

Use the freelancer bid proposal example to learn the art of under promising and over delivering.

Also, one bid proposal should not be used in all projects that you bid for. Yes, you can retain and use the same or a similar structure. It pays to have a template or sample that you can follow to save time, and money. But, using the same sample word-for-word with the exception of a few changes (such as the client’s name) will not augur well. Many clients can tell whether the proposal received is generic or specifically written for their projects.

Use the sample to avoid developing the reputation of using scripted freelancer bid examples.

A good freelance bid proposal sample will show you how to pen a letter without sounding too impersonal. Employers know that employees never value impersonal gifts. Therefore, you cannot afford to send an impersonal bid. If you send one, expect it to backfire terribly. In everyday living, impersonal stuff never counts for anything. How then can a freelancer expect an impersonal freelancer bid proposal example to attract new clients?

Often, a freelancer might feel like underbidding in the belief that this is the only way of competing with the other professionals. The truth is underbidding is not helpful. In fact, underbidding is just as harmful as overbidding. Freelancers who underbid tend to produce poor quality.

Instead of underbidding, send a bid proposal that highlights your strengths as well as your credentials. Bidding right benefits the freelancer in the following ways:

Use this template
Ready to freelance like a pro?
Create your own
Free Freelancer Bid Proposal Template
GET STARTED NOW