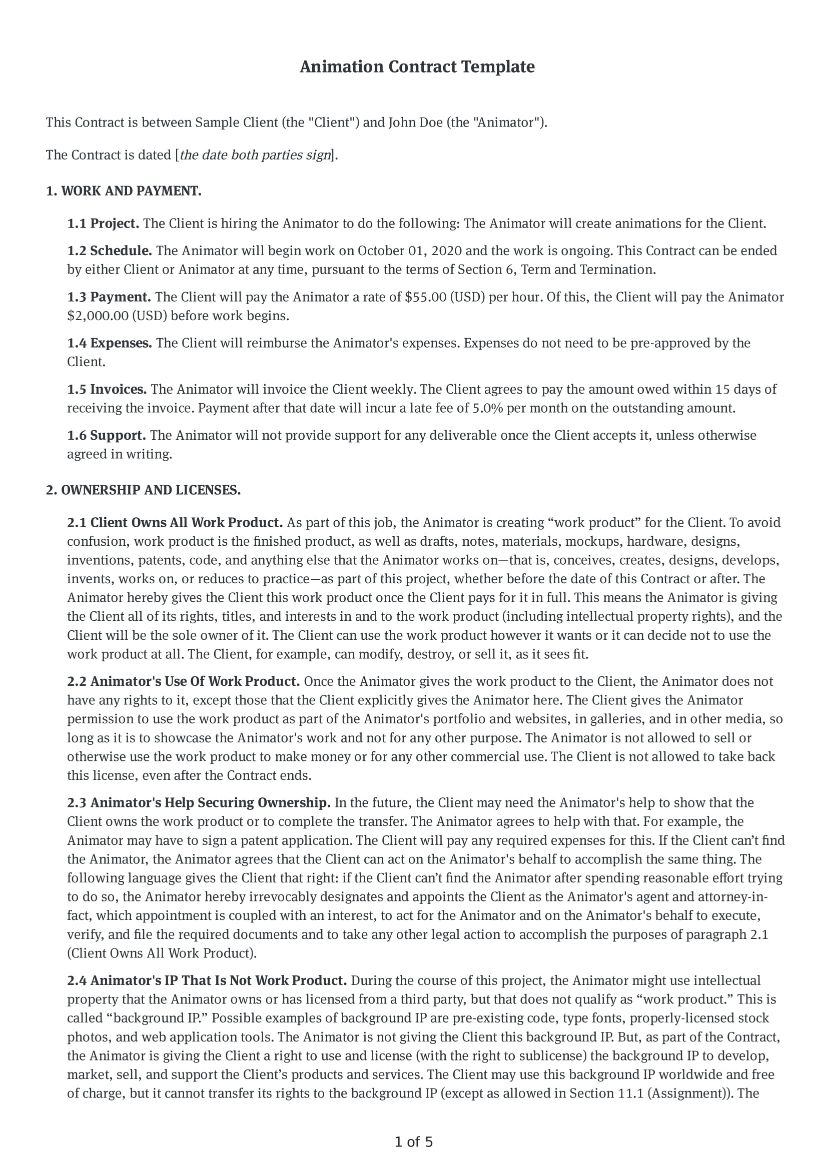 A freelancer should keep in mind that there are possibilities of terminating an animation contract. Therefore, there is a need to spell out the possible elements that may lead to the deal's termination, such as time frames, accidents, or payment terms.  These policies will help t protect the freelancer in case the agreement is not met adequately. On the other hand, the client will likely understand the circumstances upon signing the contract and perhaps maintaining the business relationship.

While creating the animation contract template, the freelancer should be specific and thorough to ensure flexibility and ensure they won't be held accountable for terminating the contract. The contract terms revolving around performing certain activities should provide room for reasonable termination without disclosing confidential information about the client.

Nonetheless, the following are the reasons that justify your decision to terminate the contract.

1. What to do if an animation contract template is impossible to fulfill?

‍It's possible to sign a animation contract template only to realize that it's impossible to fulfill. In law, you're justified in citing impossibility of performance as the main reason for seeking to terminate the contract. For example, if you encounter an accident that leaves you no longer capable of using your hands to create the animation, the client will have no choice but to agree to the request for termination. In such a situation, you would not be in breach of the contract.

The freelancer should ensure that the contract termination policy is established after negotiation with the client. This could be helpful when the client decides to disagree in the future. Some clients might misuse freelancers even when unforeseen circumstances have occurred. In such a situation, the freelancer might be held accountable if the agreement did not address the issue.

Therefore, freelancers should check out the consequences that may accompany the contract's termination and amend the policies accordingly to stay safe when you decide to discontinue.

2. Fraud or misrepresentation in your animation contract template

‍If you discover that the client behaved improperly, then you would be justified in asking for a termination of the contract. If you discover that the two of you are guilty of committing the same mistake while signing the animation contract template, you would be within your legal rights in asking for its termination. If you want to terminate the contract for these two reasons, you would have a basis for doing that in law, as what you're doing is known as rescission.

Some clients are prone to fraud and misinterpretation when dealing with clients. For instance, freelancers can be forced to work under strict conditions or tight timeline. In such situations, the freelancer can decide to end the contract. However, the agreement should include the same rights that should be addressed before commencing the animation project.

3. Breach of contract in your animation contract template

‍If the client is guilty of breaching the contract, your demand for termination would be justified. According to Dictionary Law, Breach of contract occurs when the client refuses to do what he promised. Breach also occurs when the client does what he wasn't expected to do. If the client chooses to block you from doing what you promised in the animation contract template, the courts would uphold the decision you made to terminate the agreement. It's worth noting that breach of contract can be the subject of a lawsuit.

Once the client decides to change the rules defined before commencing the project, the freelancer will likely to be misled when offering animation services. As such, the freelancer has the right to terminate the contract without facing any penalties. On the other hand, the client should compensate for the resources wasted during the contract.

4. What about prior engagement when signing an animation contract template?

‍The two of you are free to terminate the animation contract template if you had agreed to do this earlier. This would be feasible if you included the agreement in the contract. The prior agreement to terminate the deal would come into force when you give your reasons in writing to the client. The client can also do the same, but only by issuing a written notice. Ascertain that the contract specifies the conditions the two of you must meet before terminating it.

The prior agreement can be due to genuine reasons such as unproductivity or other natural causes that will interfere with the project. The animation contract agreement will allow both parties to come into a prevalent decision hence terminating the contract without affecting their business relationship.  On the other hand, the client can share the cost of the project with the client once the project has been terminated. After discontinuing the work, the freelancer and client can agree to work on other contracts using different approaches or focus on individual tasks without collaboration.

Freelancers could not want to terminate contracts unless in cases of extreme reasons. However, it is advisable to take precautions by indicating the termination terms in the animation contract agreement before starting the project.

Also, the freelancer should take time to research the client experience to determine whether they are likely to comply or allow negotiation on the same terms. As such, freelancers can work flexibly without worrying much about losing the project amid the contract with severe consequences.

Therefore, follow this guideline to know when it's alright to terminate an animation contract.

Create a contract in minutes with our step by step editing process
Use this template
Ready to freelance like a pro?
Create your own
Animation Contract Template
GET STARTED NOW

E-sign & send to your client