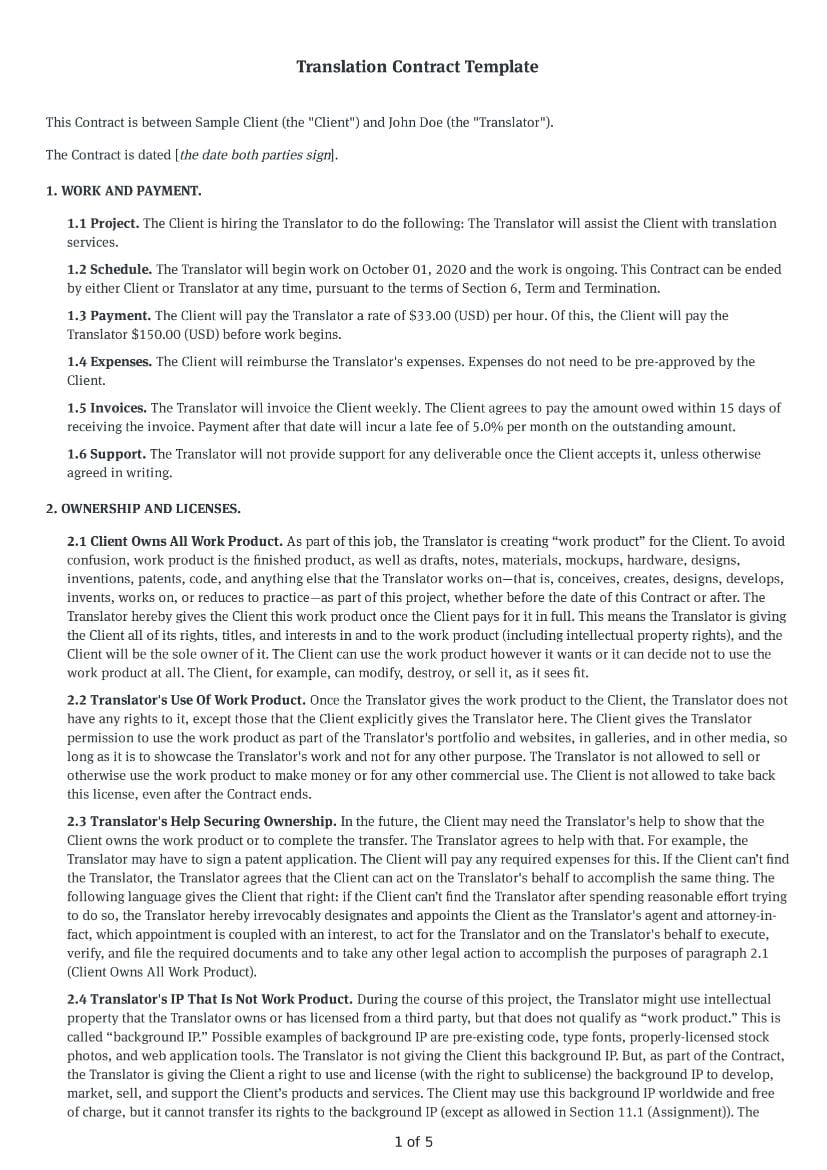 What is a translation contract?

A translation contract is an agreement between a freelance translator and their client, outlining the scope of work, milestones and deadlines, rights, and payment.

Here we take a look at why you need one, what you need to include, and our top tips for getting your contract just right.

Why do you need a translation contract template?

First and foremost, you need a well-structured and easy-to-understand translation contract to protect yourself as a freelance service provider. You should never enter into an agreement with a prospective client without first defining what it is you’re being asked to do, when you need to deliver it by, and how much you’re being paid.

Starting a translation project without a contract could leave you open to being taken advantage of, having your time wasted, or being left out of pocket.

What should you include in your translation contract sample?

Your contract should include the following information:

What should be included in a translation contract template?

Here are our top tips for creating a solid translation contract.

1. Make sure the project scope is crystal clear in the translation contract template

There’s no room for ambiguity when drafting a contract. So, to avoid the dreaded “scope creep” or potential client disagreements further down the line, you need to be meticulous when writing your project scope.

It should specify precisely what you’re being asked to do and, for good measure, also indicate what’s not included under the terms of the contract.

For example, let’s say you’ve been tasked with translating a website into Spanish. In the brief, your client has outlined the 10 pages that require translation, but they haven’t included the Privacy Policy or Cookie Policy pages. Your translation contract must highlight that these pages are not part of the agreement, otherwise, your client might try to slip them in at a later date.

2. Know your rights as a translator with the translation contract template

Disclaimer: This does not constitute legal advice. Please acquire appropriate counsel for your situation.

As a translator, you have certain rights, as per the UNESCO Recommendation on the Legal Protection of Translators and Translations and the Practical Means to improve the Status of Translators.

These include the right to:

Make sure you understand your rights as a translator, and that your translation contract highlights them in no uncertain terms.

What are the essentials of a translation contract?

If you are contracted to translate a book into another language, you could pursue royalties over and above your fee. You might even consider forgoing the fee for a larger split of the royalties from any sales of your translated work.

However you wish to negotiate it, you need to specify your terms clearly. Don’t run the risk of missing out on a potentially lucrative contract by using vague language when it comes to your payment terms.

Your contract must state how high your royalties will be; how often they’ll be paid; if they decrease over time; and if there’s an endpoint to the agreement.

Follow these tips and your next translation contract will keep you safe from scope creep, protect your rights, and make sure you’re paid on time.

Easily edit this template with our step by step contract creator
Use this template
Ready to freelance like a pro?
Create your own
Translation Contract Template
GET STARTED NOW

This Contract is between Sample Client (the "Client") and John Doe (the "Translator").

1.1 Project. The Client is hiring the Translator to do the following: The Translator will assist the Client with translation services.

1.2 Schedule. The Translator will begin work on October 01, 2020 and the work is ongoing. This Contract can be ended by either Client or Translator at any time, pursuant to the terms of Section 6, Term and Termination.

1.4 Expenses. The Client will reimburse the Translator's expenses. Expenses do not need to be pre-approved by the Client.

1.5 Invoices. The Translator will invoice the Client weekly. The Client agrees to pay the amount owed within 15 days of receiving the invoice. Payment after that date will incur a late fee of 5.0% per month on the outstanding amount.

1.6 Support. The Translator will not provide support for any deliverable once the Client accepts it, unless otherwise agreed in writing.

3. COMPETITIVE ENGAGEMENTS. The Translator won’t work for a competitor of the Client until this Contract ends. To avoid confusion, a competitor is any third party that develops, manufactures, promotes, sells, licenses, distributes, or provides products or services that are substantially similar to the Client’s products or services. A competitor is also a third party that plans to do any of those things. The one exception to this restriction is if the Translator asks for permission beforehand and the Client agrees to it in writing. If the Translator uses employees or subcontractors, the Translator must make sure they follow the obligations in this paragraph, as well.

5.4 Translator Will Comply With Laws. The Translator promises that the manner it does this job, its work product, and any background IP it uses comply with applicable U.S. and foreign laws and regulations.

5.6 Client Will Review Work. The Client promises to review the work product, to be reasonably available to the Translator if the Translator has questions regarding this project, and to provide timely feedback and decisions.

5.7 Client-Supplied Material Does Not Infringe. If the Client provides the Translator with material to incorporate into the work product, the Client promises that this material does not infringe on someone else’s intellectual property rights.

6. TERM AND TERMINATION. This Contract is ongoing, until ended by the Client or the Translator. Either party may end this Contract for any reason by sending an email or letter to the other party, informing the recipient that the sender is ending the Contract and that the Contract will end in 7 days. The Contract officially ends once that time has passed. The party that is ending the Contract must provide notice by taking the steps explained in Section 11.4. The Translator must immediately stop working as soon as it receives this notice, unless the notice says otherwise. The Client will pay the Translator for the work done up until when the Contract ends and will reimburse the Translator for any agreed-upon, non-cancellable expenses. The following sections don’t end even after the Contract ends: 2 (Ownership and Licenses); 3 (Competitive Engagements); 4 (Non-Solicitation); 5 (Representations); 8 (Confidential Information); 9 (Limitation of Liability); 10 (Indemnity); and 11 (General).

7. INDEPENDENT CONTRACTOR. The Client is hiring the Translator as an independent contractor. The following statements accurately reflect their relationship:

8.1 Overview. This Contract imposes special restrictions on how the Client and the Translator must handle confidential information. These obligations are explained in this section.

10.3 Translator Indemnity. In this Contract, the Client agrees to indemnify the Translator (and its affiliates and their directors, officers, employees, and agents) from and against liabilities, losses, damages, and expenses (including reasonable attorneys’ fees) related to a third-party claim or proceeding arising out of a breach by the Client of its obligations under this Contract.

(a) Over the course of this Contract, one party may need to send a notice to the other party. For the notice to be valid, it must be in writing and delivered in one of the following ways: personal delivery, email, or certified or registered mail (postage prepaid, return receipt requested). The notice must be delivered to the party’s address listed at the end of this Contract or to another address that the party has provided in writing as an appropriate address to receive notice.

11.6 Signatures. The Client and the Translator must sign this document using Bonsai’s e-signing system. These electronic signatures count as originals for all purposes.

11.7 Governing Law. The laws of the state of Florida govern the rights and obligations of the Client and the Translator under this Contract, without regard to conflict of law principles of that state.

The rich text element allows you to create and format headings, paragraphs, blockquotes, images, and video all in one place instead of having to add and format them individually. Just double-click and easily create content.

How to customize formatting for each rich text

Headings, paragraphs, blockquotes, figures, images, and figure captions can all be styled after a class is added to the rich text element using the "When inside of" nested selector system.