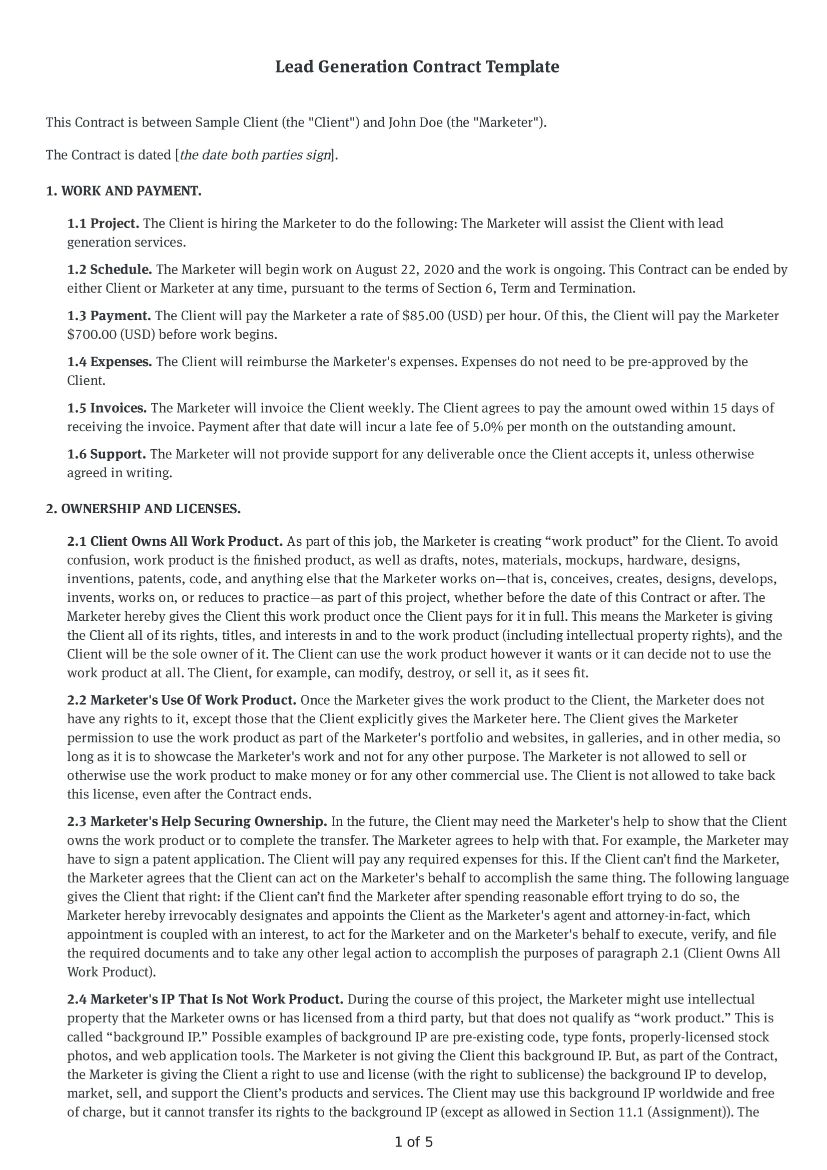 Signing a lead generation contract before asking some important questions is a bad way of running your business. First, you have to sit down with the vendor and clarify a few issues. According to the US News, knowing what to expect before signing a lead generation agreement template is a good business practice. The words on the lead generation contract PDF are special. They are significant; hence, the importance of reading and understanding them well. If the words appear confusing, seek clarification from the vendor or your attorney.

Unlike other freelance jobs, with lead generation, the client expects to see results. Therefore, you don’t want to promise more than you can deliver, as that would cause friction between you. By signing the agreement, you agree that you’re going to help the client achieve their goals, and that’s the only reason they’re hiring you. Usually, a lead generation contract PDF contains the scope of work, client expectations, the terms of payment, a termination clause, and other sections depending on the job requirements.

Out of the many clauses included in a lead generation contract template, the scope of work and payment terms are essential. At the end of every task, you expect the client to pay you, and they’ll only be willing to give your dues if you’ve met the stipulated objectives. Otherwise, you can brush shoulders during payment. On your part, you wouldn’t want to offer services beyond your scope of work, and if you do, you expect the client to pay for it. It’s challenging to have such a discussion with a client if no documentation defines the agreement. That’s why a lead generation agreement template is if importance.

Before signing the lead generation contract PDF, both the client and freelancer should read through it carefully to understand what they’re committing to, and if they’ll be able to live up to it.

So, what questions should you ask the vendor?

1. Ask the source of his leads for the lead generation contract template

‍First, let him tell you where he's getting the leads. This question is important as it informs you whether the vendor is obtaining the leads illegally. Some illegal ways of lead generation include buying them from third party sources. Some vendors have a tendency of engaging with their own audiences and asking for leads from such sources.

Now, this wouldn't be a problem if you don't care about the source of the leads. However, failure to seek this information might expose you to two possibilities, as shown below:

As a freelancer working so hard to build a strong reputation, you wouldn’t want to get here. Such things not only put your career at risk but also lowers your income. Therefore, before you agree to everything included in the lead generation contract template, ensure you ask your client this question. Keep in mind that you need to know this for planning, but in the end, the client expects you to deliver. It’s up to you to find out which methods of lead generation work best for your client. Even before signing the lead generation agreement template, you can have a chat with them to explore more. In case you notice anything that may work against their success, it’s important to notify them in advance so that they rectify it before the lead generation contract PDF comes to effect.

A good client should be willing to share such information with you. In case they aren’t ready to answer this question, then there’s no need to sign the lead generation contract template. As much as you’d like to please a client or keep a job, you don’t have to compromise your standards. However, before you decline the lead generation agreement template, take your time to explain to them why such information is important to you as a freelancer.

2. Ask how he will set the program for the lead generation contract template

‍Next, ask the vendor to explain how he intends to set the program. Avoid making assumptions. Seek clarifications from the vendor all the time. Ask the vendor to clarify whether  he's able to promote multiple assets. Let the vendor explain whether he will  allow you to change assets right in the middle of the lead generation campaign. Ask questions and obtain answers. According to an article published in Jstor.org, misunderstandings are capable of nullifying the power and responsibility that a lead generation agreement template confers upon the parties involved.

While the client is handing over the task to you as a freelancer, they expect you to work according to set standards. They’ve already stated how they would like you to handle the task in the lead generation agreement template. But don’t assume that you’ll find your way with time. In case something isn’t clear in the lead generation contract PDF, don’t hesitate to ask the client. The good thing is that most clients are willing to offer freelancers support to make it easier for them to work on the project.

To avoid disagreements in the course of work, always aim at helping a client achieve their goals based on the given requirements. It’s still fine to outline your goals as a freelancer in the lead generation contract template, but remember, that it’s about making your client happy at the end of the day. So, don’t do anything out of scope. If possible, walk with your client every step of the way. In that way, you’ll have smooth time working on their project.

3. Ask him to be clear on the amount of time he needs for the lead generation contract template

Every project has a timeline, and a client will pay a freelancer depending on the time they’ve dedicated to the work. If you’re billing hourly, a client will pay for all the hours spent on the task. However, keep in mind that a client isn’t just paying you for the time you’ve dedicated to the project. They’ll also assess the job to see whether you’ve added any value to their business. If not, they could terminate the contract after the first payment. Therefore, as a freelancer, be result-oriented in as much as you’re out to generate income.

Ready to freelance like a pro?
Create your own
Lead Generation Contract Template
GET STARTED NOW