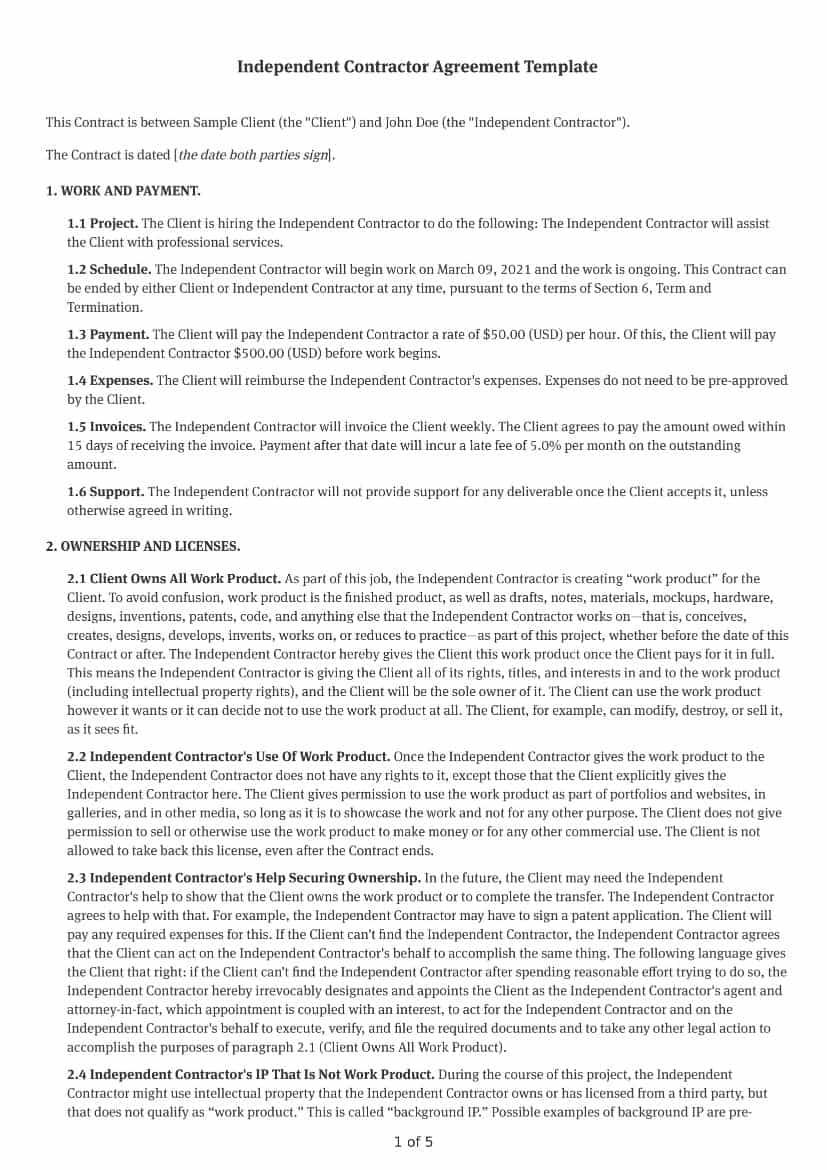 What is an independent contractor agreement?

Using an independent contractor agreement is the best way to establish a positive working relationship between a contractor and their client.

However, you may be concerned about the contents of that your work agreement covers all the necessary areas. If you're feeling unsure, a contractor agreement template can make the entire process quick and simple.

This little guide will take you through everything you need to know about drafting a contractor agreement that works for everyone involved. From why these documents are important for any contractors, to the key sections to include. Hopefully, this guide should help make writing your contractor agreement effortless.

It's a binding agreement that details how and when the contractor will complete a service, and it also highlights important factors like payment terms, liabilities, and termination procedures.

A contractor agreement form is the best way to ensure that all parties are on the same page, and it also protects the contractor and the client in situations such as unfair dismissal, or incomplete work.

The document is also useful for tax reasons, as contractor status can affect how much tax an individual has to pay.

What should be included in an independent contractor agreement template?

Making sure that your contractor agreement has everything it needs can seem overwhelming - so here are the key clauses that any good contract should include:

Details About the Contractor and the Client

It's important to document every party involved in your independent contractor agreement.

Remember to state the client name, business name, postal address and contact information - and do the same for the independent contractor.

To avoid potential miscommunication, it's important to state all contractor services as clearly as possible. This way, you reduce the chances of any party being unhappy with the final work product.

Try to list every service that the contractor will complete - including tasks such as sourcing and obtaining materials if applicable.

You may wish to give a job schedule, stipulate working hours, and give dates for when each stage of the service should be completed. Remember, the more detailed your description, the more positive your outcome will be.

Status of the Independent Contractor

It's vital to state that the company or client is offering employment on a contracted basis. Essentially, you must define that the independent contractor is not an employee, and will only remain with the client until the terms of their agreement have been completed.

You may also wish to list whether the contractor is eligible for any employee benefits and whether they can employ subcontractors to help them complete the final work product.

To avoid miscommunication between parties, it's vital to outline all costs in detail.

State who is responsible for covering any expenses (e.g. travel or materials), and give an itemised list of all costs, in addition to a final total. If any costs are estimated and subject to change, remember to highlight that, too.

If the client is required to pay a deposit or make multiple payments towards expenses, you should state this, and give clear dates when payment is expected.

It's also useful to state occasions when either party may be exempt from payment - such as in the case of incomplete services.

In the event an independent contractor produces content for the client company - such as photographs or written work - your agreement should cover who has the rights to that intellectual property.

State which products belong to which parties, and outline who has the right to reproduce or use the content in future, in accordance with copyright laws.

If you're unsure whether this information applies to your company, you can always use contract templates to help you.

This clause is an essential part of contracts - as it provides vital protection for all parties in the event of disagreements.

The indemnification section should state who is liable to pay any compensation in the event a certain term is breached, the services are incomplete, or similar losses occur.

If you're unsure how to include this information in your independent contractor agreement, then using an agreement template can be incredibly useful.

Your agreement should cover how and when the contractor will cease to be employed by the client.

State that the independent contractor will be released from the agreement once they have completed their services - you may wish to give provisional termination dates, or state how long the agreement is valid.

You should also outline any circumstances in which both parties will be released from the agreement early  - such as if someone violates certain contracted conditions.

When should you use independent contractor agreements?

Employing an independent contractor can be a great way to have a highly skilled individual join your team on a temporary basis.

As an independent contractor is self-employed - they are not a permanent employee of a business, and will only remain working with the client until the terms of their work contract have been fulfilled.

For this reason, you should always use an independent contractor agreement when working with a freelance contractor.

It's the best way to ensure that every party understands the services that are being purchased, and can help you stipulate when and how certain tasks are completed. Using a contractor contract also helps to protect everyone involved, especially in the event of losses, damages, or disagreements.

What should be included in the perfect independent contractor agreement template?

Easily edit this template with our step by step contract creator
Use this template
Ready to freelance like a pro?
Create your own
Free Independent Contractor Agreement Template
GET STARTED NOW

This Contract is between Sample Client (the "Client") and John Doe (the "Independent Contractor").

1.4 Expenses. The Client will reimburse the Independent Contractor's expenses. Expenses do not need to be pre-approved by the Client.

1.5 Invoices. The Independent Contractor will invoice the Client weekly. The Client agrees to pay the amount owed within 15 days of receiving the invoice. Payment after that date will incur a late fee of 5.0% per month on the outstanding amount.

1.6 Support. The Independent Contractor will not provide support for any deliverable once the Client accepts it, unless otherwise agreed in writing.

5.7 Client-Supplied Material Does Not Infringe. If the Client provides the Independent Contractor with material to incorporate into the work product, the Client promises that this material does not infringe on someone else’s intellectual property rights.

7. INDEPENDENT CONTRACTOR. The Client is hiring the Independent Contractor as an independent contractor. The following statements accurately reflect their relationship:

8.1 Overview. This Contract imposes special restrictions on how the Client and the Independent Contractor must handle confidential information. These obligations are explained in this section.

10.3 Independent Contractor Indemnity. In this Contract, the Client agrees to indemnify the Independent Contractor (and its affiliates and their directors, officers, employees, and agents) from and against liabilities, losses, damages, and expenses (including reasonable attorneys’ fees) related to a third-party claim or proceeding arising out of a breach by the Client of its obligations under this Contract.

(a) Over the course of this Contract, one party may need to send a notice to the other party. For the notice to be valid, it must be in writing and delivered in one of the following ways: personal delivery, email, or certified or registered mail (postage prepaid, return receipt requested). The notice must be delivered to the party’s address listed at the end of this Contract or to another address that the party has provided in writing as an appropriate address to receive notice.

11.6 Signatures. The Client and the Independent Contractor must sign this document using Bonsai’s e-signing system. These electronic signatures count as originals for all purposes.

11.7 Governing Law. The laws of the state of Alaska govern the rights and obligations of the Client and the Independent Contractor under this Contract, without regard to conflict of law principles of that state.