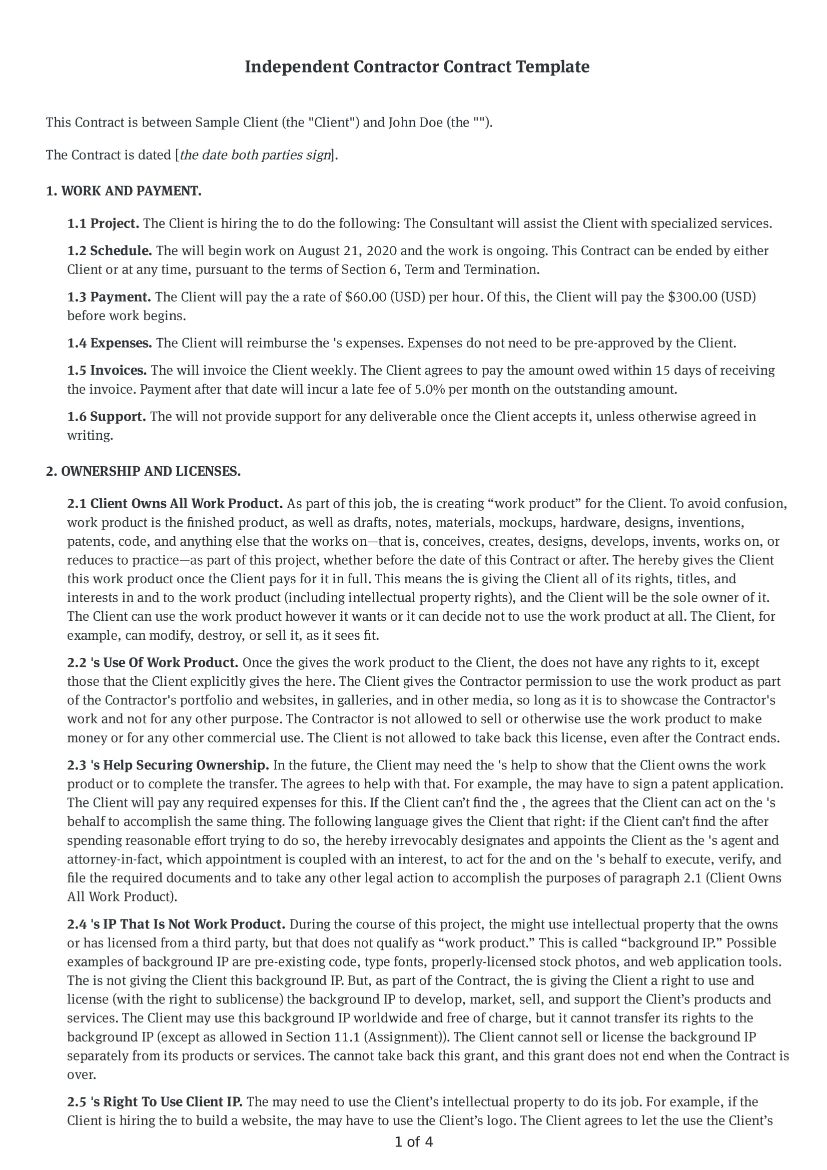 It defines all elements essential to maintaining a healthy contractor-client relationship. It defines the responsibilities and duties of the client vis-à-vis the contractor. The contract defines who the contractor is clearly. It leaves no room for any sort of ambiguity. Everything is clearly spelled out, and the independent contractors begin working as one safe in the knowledge that their status will not change, especially later when they have to file their tax returns. The contract is essential for the success of any arrangement or project between contractor and client.

2. The contractor contract template goes into detail while explaining the relationship between the two parties

Before preparing or signing the contract, it is good to check what the local laws have to say. For example, what do state laws say regarding independent contractors? Other than that, the two parties also need to specify everybody’s duties and responsibilities. Additionally, issues regarding compensation (remuneration) also need to appear on the independent contractor contract template. What is more, the contract needs to stipulate the kind of reports that need to be written in the course of the project.

Who is in charge of out-of-pocket expenses? This issue also needs to appear on the contract. Where the out-of-pocket expenses are concerned, the independent contractor contract template should be clear on questions regarding the “what” and the “how.” It should define what these types of expenses are. It should also highlight how these expenses will be handled. As previously stated, it is worth reiterating the fact that the contract indicates that the client is dealing with an independent contractor rather than an employee.

3. A good independent contractor agreement anticipates that the relationship may run into some problems

Therefore, it lays the procedure regarding what to do when this happens.

The closest a client comes to firing an independent contractor is by canceling the contract.

A company’s trade secrets together with its confidential information represent two of its most important assets. All businesses must do whatever it takes to protect itself. The need for protecting its assets has gone a notch or two higher, especially now that Internet has become such a major platform for sharing or finding information quickly. An independent contractor might share something regarding an on-going project only to jeopardize something the client wanted to keep away from the public until an opportune moment.

All businesses must value confidentiality since they all have information they;

Any precious or sensitive information a business has is worth something substantial.

Confidentiality is not something to worry large companies alone.

Therefore, the independent contractor contract template must clarify the issue of confidentiality.

What about inventions, improvements, and innovations? Should the independent contractor contract touch on these issues too? Yes, it should. In fact, it should not only touch on but also specify these crucial issues. Any new product or way of doing things the contractor come up with while working on a client’s project need protection. Here, the contract should not leave the issue in abeyance. Instead, it should clarify matters, so all parties know what is required of them for the duration of the project.

The other issue that should appear on the independent contractor agreement is how to manage issues regarding conflicts of interest. Talking about these issues on the contract helps everybody. The client and contractor do not have to wait for the conflicts to arise to start looking for solutions. A healthy relationship between the two hinges on their ability to anticipate trouble and doing whatever it takes to work their way through it. In fact, the ability to manage conflict of interest determines your success.

Do not sign a contract that does not handle conflicts of interest and hope for the best.

You do not have to be a pacifist to find ways of managing conflicts of interest. The goal here is to do your part in ensuring the relationship survives minor hiccups and moves on to the next level. You have the choice of handling conflicts of interest in a functional or dysfunctional manner. Conflict of any kind, even if its conflict of interest, is neither good nor bad. How it pans out depends on the approach you take in solving the conflict in the first place. That is what determines whether the conflict works for your good or harm.

The main goal of talking about conflicts of interest in the independent contractor agreement is to find a way of deescalating it. You cannot de-escalate what you work so hard to avoid. In many instances, it is nearly impossible to try to avoid conflict of any kind. In such cases, what you need is a way of deescalating the whole thing. You can learn a few tips that make you effective at deescalating conflict. When any party to the contract notices the conflict of interest, the first thing is to avoid going defensive or attacking the other one excessively.

4. Good contractor contract templates also talk about issues such as the right to an injunction

Feel free to check and learn from these few right to injunction samples.

At times, the client or contractor might contemplate a merger. Nothing is wrong with mergers. However, none of the parties can proceed with this path without informing the other one. More importantly, the steps to take in case a merger is in the pipeline are also worth anticipating. The best way to take care of everybody’s interest is by ensuring the contract talks about what to do in case mergers are contemplated. An issue worth negotiating in such situations is that of successions and assigns.

At times, the parties may opt to stop the project for some time until the merger is complete.

Everything is possible only if it all appears on the independent contractor contract.

It is also good to include a clause that talks about arbitration in the contract. Arbitration is just one of the ways of solving a conflict between clients and contractors. First, start by reviewing the contract in detail to discover what it stipulates regarding arbitration. Next, organize a meeting between the two of you to negotiate a way out of the quagmire. Find a professional to help mediate the dispute. Mediation is more structured. It should happen if a meeting between the two feuding parties bears no fruit.

Choose an independent and unbiased mediator.

A mediation agreement is necessary to prove the two parties arrived at an understanding.

If arbitration fails, the client and contractor would be justified in going for litigation, but only if the contract has a provision for this option. Litigation is always the last resort in conflict resolution. It revolves around court proceedings. Litigation happens when one of the parties feels compelled to seek the court’s help in enforcing legal rights. It also happens when one of the parties needs court’s assistance to defend legal rights that are under threat. Litigation is always structured. The court dictates the whole process.

Litigation is effective. The process is also costly and capable of consuming too much time.

Litigation ends the moment the judge makes a decision.

The court may require whoever is unsuccessful with the litigation to pay all or part of the legal costs incurred by the other party. The successful litigant may recover part of the money spent paying for legal fees. However, clients and contractors should spend time trying to find other ways of solving the conflicts before dashing to the courts. Litigation has several disadvantages, as you may have noticed above. It will keep the clients away from a product that should be out being sold and earning more money for them. It prevents contractors from making money too.

Lastly, check what the independent contractor agreement says about amending some of the provisions. Additionally, it should also talk about the measures the client and contractor intend to take to enforce the contract. It goes without saying that both parties have to agree to all provisions and stipulations in the contract. Do not forget to invite lawyers to help draft the contract. If you feel hiring a lawyer is an expense too many for both of you, find a pre-defined contract, which is readily available online. Search for one on the Internet.

Ready to freelance like a pro?
Create your own
Independent Contractor Contract Template
GET STARTED NOW