Actor Contract Template
Create your own

with a bulletproof template & simple e-signing
Generating your document...
Oops! Something went wrong while submitting the form.
Bonsai has helped create 1,023,928 documents and counting
Table of Contents

What Is a Standard Actor Contract?

A standard actor contract is a written agreement of employment between an actor and the client or employer. This is a legally binding document, so it protects the interests of both parties involved and outlines all their terms and conditions to complete an acting job.

Whether you’re in films and movies, live performances, or TV, a standard actors contact will go a long way in helping you to secure your rights, as well as create an atmosphere of professionalism and prestige.

When you expect to get more than one acting role, an actor contract template is going to be your next best friend. With this, you'll be able to have all your standard requirements written down and ready to go for when you land your next big role.

Note: Ready to get straight into it? Sign up to Bonsai to make your own freelance actor contract now.‍

What’s the Difference Between an Actor Contact and a Release Form?

‍It’s important to remember that an actor contract may not always contain a release form, which will be a separate legal document in itself. An actor contract provides security in employment and protects the rights and interests of all parties involved, whereas a release form will state that the actor gives their ownership of their performance to be used in conjunction with the show.

Basically, if you want your show to belong to you, the actor will need to sign a release form.
‍‍

What Should Be Included in a Standard Actor Contract?‍

Below you will find some standard sections and details to include in your actor contract template. For freelancers, it’s good to note that you may need to add other specifics in your freelance contract.

Detailed descriptions of the work

This is the part of the contract where you’ll outline what the role and responsibilities of both parties are, as well as any performance expectations and requirements.

Besides the glitz and glamour of being an actor, you also have a responsibility for performing at a certain level that the director, producers, and you have agreed upon. Carefully detailing your performance expectations will help you and your client get a clear image of what is expected from you during the performance—this at least gives you a bar to aim for. Often, actors would also need to sign a performance agreement.

For a director or production company, creating call sheets and outlining specifics will give you more control over the entire production. This will allow you to communicate your wishes to the actor a whole lot better for when it's showtime.

Hours and timeline of the project

You should agree to the start and end dates of the employment before you sign. For instance, if the client wants the actor to sign on for a TV series, they may have to dedicate months or years to the performance. This could affect the type of employment contract that’s needed, such as a retainer contract or freelance contract.

Your actor contract should also state the total number of hours that the client wants the actor to dedicate to the new job. For example, the deal might include a clause stating that the actor must be available for 11 hours every day for the job. Also, it may indicate the number of times and dates that freelancing actors will have to perform.

Here you’ll want to include all your payment conditions. For example, you could want payment per performance, per hour, or a flat rate for the performance. It’s a good idea when creating an actor invoice to include your preferred payment method, so that you’re prepped and ready to go when sending it through to your client.

Remember that how much you charge is totally up to you and will vary depending on the other party involved. It’s always wise to discuss your payment options early on in the contract agreement as this can usually make or break a contract.

Every actor contract should include a section on expenses. This means an actor will be compensated for travel, accommodation, food, or anything else that’s relevant to the production. A production company may specify whether they offer such amenities on-set or at shooting locations, or provide monetary equivalent.

Sometimes, a location agreement may be necessary, as actors will have to move to different locations to be able to perform on set.

Many actors will have to come to a merchandising agreement for appearances in books, posters, t-shirts. Sometimes, you may have to make appearances in talk shows, premiers, and other events which go beyond the scope of filming and production. While this may not apply to every actor, it’s important to discuss whether or not this applies to you in your actor contract. You should always seek professional advice for anything related to merchandising and what you should be asking as compensation.

Certain actor agreements may request the actor to grant rights to the employer to use the actor’s name and image for the project. This clause allows you to use it as a bargaining chip to secure a handsome compensation for the usage of your image, name, or likeness for merchandising or promotional purposes.

This is an essential section for actors because it can restrict their right to feature in another acting role. Sometimes, an actor will want to take on other roles that get offered to them during the timeline of the contract. This means they might be unavailable on certain days and disrupt the flow of production.

An exclusivity agreement doesn’t have to be either yes or no. You can come to an agreement on what days, dates, months, or years the actor has to be on location. Outside of those agreed times, they can be free to do whatever acting job they choose! Keep in mind that a flexible exclusivity agreement should include restrictions on any physical changes the actor may undertake for other roles.

It’s a good idea to get yourself some legal advice from an attorney about exclusivity rights in your country.

Every contract needs a termination clause. This could be after the film, movie, or finished product has premiered, or a date that the production company and director specify.

It should also include any reasons for early termination and who's responsible should one party break the contract. Two or more parties should agree to these reasons for a seamless signing experience.

Other factors to consider are public liability insurance for the business, photography sessions for the actor, or intellectual property rights.

Liability insurance is something to consider because it will cover the business should any accidents happen on set. Photography sessions may be necessary for actors, which include principal photography and when the principal photography begins. Intellectual property rights can be important when considering ownership of catch-phrases, imagery, or something else that requires permission to use.

Only you will know everything that’s needed for your contract, however, an actor contract template is a sure-fire way of making sure all your needs and requirements are met for every contract agreement.
‍‍

Sign up now to Bonsai, it's free to do and from there you can choose the actor contract to edit and use for your next booking.
‍‍

What’s the Benefit of Using Bonsai, Instead of Editing a Template Yourself?‍

Let’s admit it, creating and editing a contract yourself is a lot of effort that can slow down your journey towards stardom. However, contracts are a necessary form for every actor. So, instead of spending a lot of time making one from scratch, you can use an actor contract template from Bonsai.

Everything necessary for you to get a fair deal will be included in the template. What’s better is that every template can be easily edited and customized to fit your professional requirements.
‍‍

How to Create an Actor Contract With Bonsai‍

Creating an actor contract template with Bonsai is a breeze. There are only a few short steps:

Once you’re at step five, you'll be able to review your fully vetted actor agreement. If you want to make any edits to the template, you can do it at this stage. Once you're completely happy, you and e-sign and send it to your client to do the same.
‍‍

What is fair compensation for an actor?

An actor’s rate will always be dependent on a wide variety of things. Fame might be the first thing to come to mind, with big-name movie stars charging obscene amounts over your average TV show extra.

For the average actor or performer in the U.S., fair compensation usually falls between $23-$34 per hour. Remember it's not only experience and fame that will determine your fair rate, but there's also the type of production it is, what state or country you're in, and other factors that can change what you consider a reasonable rate.

What happens if an actor breaks the contract?

It's not unknown for actors to break their contracts, leading them to suffer financially with a hefty fine. While most actors won't have to worry about fines that large, a breach of contract is definitely considered serious misconduct for any party involved. Depending on the termination clause that you and the actor agree to, you may be entitled to compensation should an actor break their contract with you. If this situation occurs, it's always wise to get advice from a legal expert or attorney about what the right procedure is. 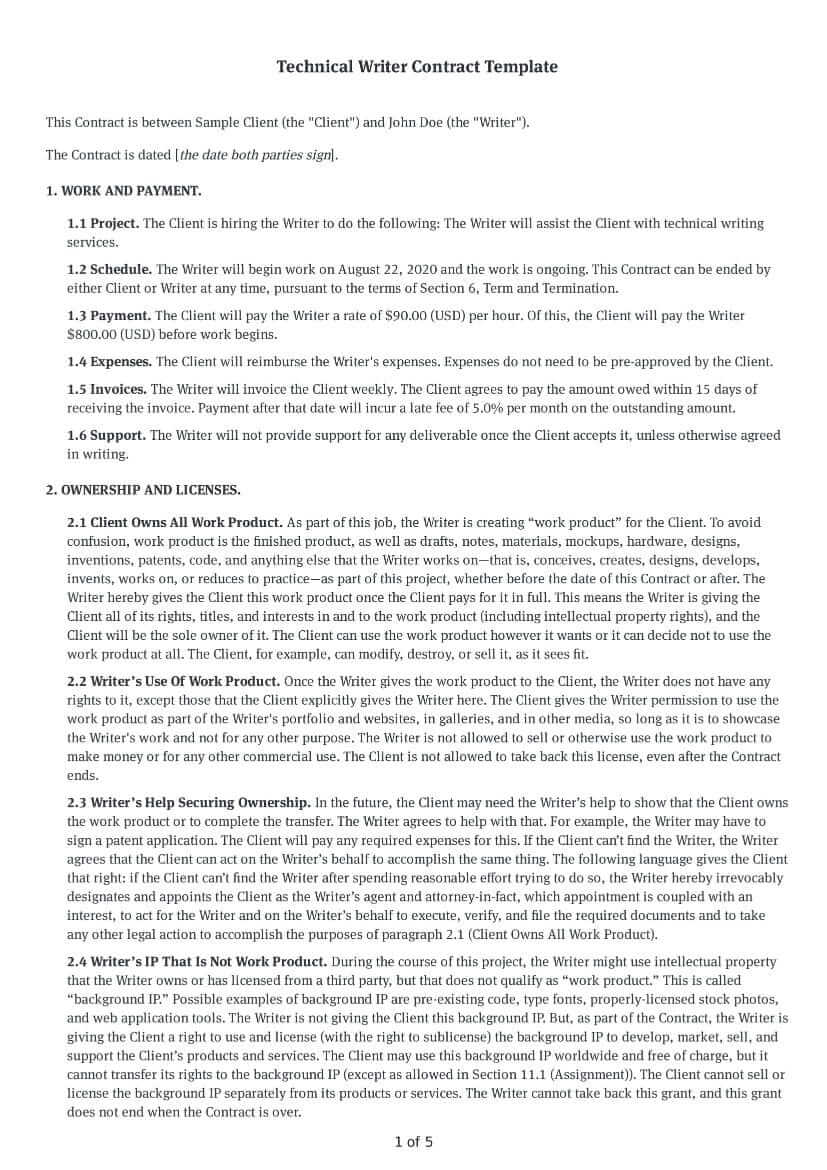