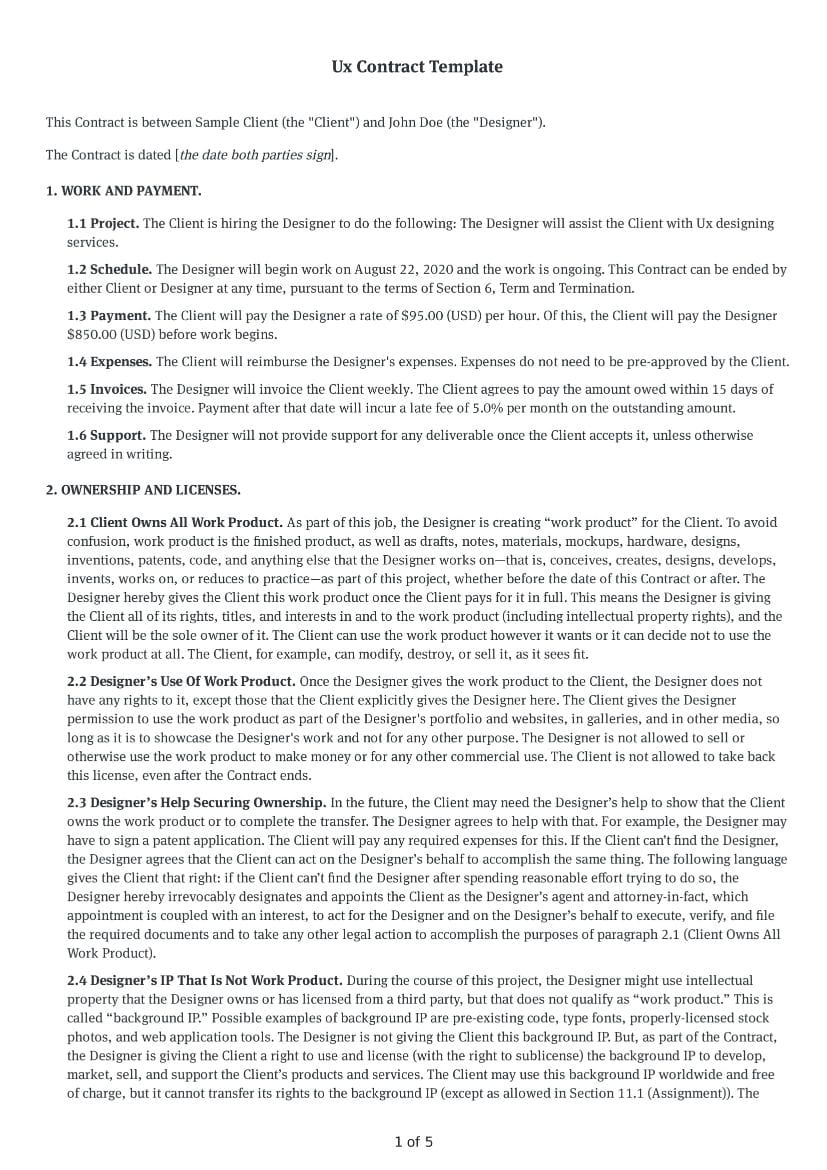 What is a UX contract?

Seek employment with institutions that place great value on user experience. This respect will come from a project management team that researches on real clients throughout a development cycle. There is no perfect institution, however. Concentrate on finding an environment that supports your work while sharing values and make sure you have a proper UX design contract template set up.

You need to appreciate that limited budgets to meet client needs exist everywhere. You must therefore know avenues of quantifying benefits to user experiences. This way, improvements in experience may obtain priority compared to other budget items.

What should be included in a UX contract template?

Seek employment with institutions that place great value on user experience. This respect will come from a project management team that researches on real clients throughout a development cycle. There is no perfect institution, however. Concentrate on finding an environment that supports your work while sharing values and make sure you have a proper UX design contract template set up.

You need to appreciate that limited budgets to meet client needs exist everywhere. You must therefore know avenues of quantifying benefits to user experiences. This way, improvements in experience may obtain priority compared to other budget items.

What are the essentials of a UX contract?

You need to seek positions that let you concentrate on your realms of experience and expertise. In the UX field, choice ranges include interaction design, information architecture, scenario or user flow designing, user testing, taxonomies and content analysis requirements - whatever you choose, make sure you have a UX design contract template in place.

Seek to do really well here and stop hoping to make determinations of entire products. According to J Morag, place your trust on product managers to do this. If trust does not arise, go elsewhere where you can.

5. Be happy with your UX contract template

Should you still feel unhappy with your position even with putting all these pieces into play, take a step back. Find out what really is going on. Your frustrations may lie in your position as a business analyst, visual developer, designer, or product manager.

You could be making this position personal. As such, you are most likely to treat idea rejection as personal rejection. At this junction, remember your job is to give clients satisfaction under a budget. It is never about yourself, but just to protect the downside, repare a UX design contract template in advance.

Should you find yourself in this position firm after firm, then it is really about you. This is the point where you seek help.

Finally, as stated in this seminar, you need to stop seeking employment in wrong places. Make changes in your lifestyle instead. You are worth it.

Easily edit this template with our step by step contract creator
Use this template
Ready to freelance like a pro?
Create your own
UX Contract Template
GET STARTED NOW

This Contract is between Sample Client (the "Client") and John Doe (the "Designer").

1.1 Project. The Client is hiring the Designer to do the following: The Designer will assist the Client with Ux designing services.

1.2 Schedule. The Designer will begin work on August 22, 2020 and the work is ongoing. This Contract can be ended by either Client or Designer at any time, pursuant to the terms of Section 6, Term and Termination.

1.4 Expenses. The Client will reimburse the Designer's expenses. Expenses do not need to be pre-approved by the Client.

1.5 Invoices. The Designer will invoice the Client weekly. The Client agrees to pay the amount owed within 15 days of receiving the invoice. Payment after that date will incur a late fee of 5.0% per month on the outstanding amount.

1.6 Support. The Designer will not provide support for any deliverable once the Client accepts it, unless otherwise agreed in writing.

3. COMPETITIVE ENGAGEMENTS. The Designer wonâ€™t work for a competitor of the Client until this Contract ends. To avoid confusion, a competitor is any third party that develops, manufactures, promotes, sells, licenses, distributes, or provides products or services that are substantially similar to the Clientâ€™s products or services. A competitor is also a third party that plans to do any of those things. The one exception to this restriction is if the Designer asks for permission beforehand and the Client agrees to it in writing. If the Designer uses employees or subcontractors, the Designer must make sure they follow the obligations in this paragraph, as well.

5.4 Designer Will Comply With Laws. The Designer promises that the manner it does this job, its work product, and any background IP it uses comply with applicable U.S. and foreign laws and regulations.

5.6 Client Will Review Work. The Client promises to review the work product, to be reasonably available to the Designer if the Designer has questions regarding this project, and to provide timely feedback and decisions.

5.7 Client-Supplied Material Does Not Infringe. If the Client provides the Designer with material to incorporate into the work product, the Client promises that this material does not infringe on someone elseâ€™s intellectual property rights.

6. TERM AND TERMINATION. This Contract is ongoing, until ended by the Client or the Designer. Either party may end this Contract for any reason by sending an email or letter to the other party, informing the recipient that the sender is ending the Contract and that the Contract will end in 7 days. The Contract officially ends once that time has passed. The party that is ending the Contract must provide notice by taking the steps explained in Section 11.4. The Designer must immediately stop working as soon as it receives this notice, unless the notice says otherwise. The Client will pay the Designer for the work done up until when the Contract ends and will reimburse the Designer for any agreed-upon, non-cancellable expenses. The following sections donâ€™t end even after the Contract ends: 2 (Ownership and Licenses); 3 (Competitive Engagements); 4 (Non-Solicitation); 5 (Representations); 8 (Confidential Information); 9 (Limitation of Liability); 10 (Indemnity); and 11 (General).

7. INDEPENDENT CONTRACTOR. The Client is hiring the Designer as an independent contractor. The following statements accurately reflect their relationship:

8.1 Overview. This Contract imposes special restrictions on how the Client and the Designer must handle confidential information. These obligations are explained in this section.

10.1 Overview. This section transfers certain risks between the parties if a third party sues or goes after the Client or the Designer or both. For example, if the Client gets sued for something that the Designer did, then the Designer may promise to come to the Clientâ€™s defense or to reimburse the Client for any losses.

10.3 Designer Indemnity. In this Contract, the Client agrees to indemnify the Designer (and its affiliates and its and their directors, officers, employees, and agents) from and against liabilities, losses, damages, and expenses (including reasonable attorneysâ€™ fees) related to a third-party claim or proceeding arising out of a breach by the Client of its obligations under this Contract.

(a) Over the course of this Contract, one party may need to send a notice to the other party. For the notice to be valid, it must be in writing and delivered in one of the following ways: personal delivery, email, or certified or registered mail (postage prepaid, return receipt requested). The notice must be delivered to the partyâ€™s address listed at the end of this Contract or to another address that the party has provided in writing as an appropriate address to receive notice.

11.6 Signatures. The Client and the Designer must sign this document using Bonsaiâ€™s e-signing system. These electronic signatures count as originals for all purposes.

11.7 Governing Law. The laws of the state of Iowa govern the rights and obligations of the Client and the Designer under this Contract, without regard to conflict of law principles of that state.